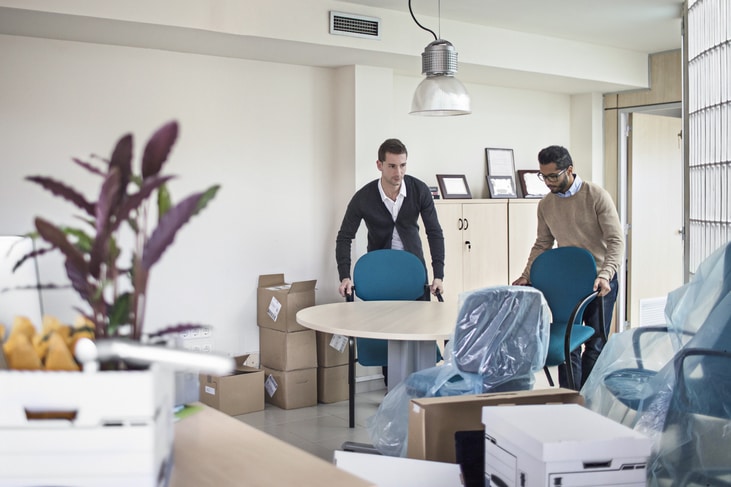 Correira Brothers Moving and Storage Inc is a moving company based in Rhode Island. They are concerned about people’s needs, and their goal is to make moving within Rhode Island as stress-free as possible. Correira Brothers is a reliable and skilled company to work with, with over ten years of experience and nothing but positive feedback from customers.

Gentle Giants is a well-known and highly rated long-distance moving company that serves all 48 states in the continental United States. Larry O’Toole founded this professional moving company in 1980 with the goal of assisting people with their business relocations and reducing as much of the stress of moving as possible. Gentle Giants is not only still in business today, but it is also one of the most popular residential and commercial movers in the entire country.

Coutu Brothers Moving and Storage is a family-owned and operated moving company. They’ve been in business since 1940. From 2013 to 2019, Providence Business News ranked the company among the Top 25 ‘fastest-growing private companies.’ Their policy is to treat their customers as if they were family. This means a stress-free and quick-moving process, regardless of the services you require from them.

A Star Movers has offices in Massachusetts and Rhode Island. It is a family-owned and operated business that has been passed down through four generations. They have decades of combined experience. Their company was founded on the principles of safety, customer satisfaction, and ethical business practices.

Lawton Moving and Storage is a reputable moving company that provides excellent customer service. The company takes pride in being founded by an experienced operator, so you can expect professional and experienced service. They are also well-equipped with cutting-edge technological materials and equipment to ensure the quality of the services provided.

Why do people move to Rhode Island?

The state knows as the “Ocean State,” and it is a cultural, economic, educational, tourism, and social life center. The city of Providence serves as the state’s capital. Rhode Island has its own dialect, cuisine, landmarks, places to visit, and excellent sports facilities. Ocean Drive Historic District, The Breakers, Castle Hill Lighthouse, and Rough Point in Newport, Fort Wetherill State Park in Jamestown, Roger Williams Park and RISD Museum in Providence, Lincoln Woods State Park in Lincoln, and many beaches such as Second Beach, Mackerel Cove Beach, Scarborough State Beach, Roger Wheeler State Beach, and others are popular tourist attractions in the state.

For those looking for work, Rhode Island offers a wide range of career options.

As the world’s fastest-growing economy, it has a large number of job openings. Furthermore, in comparison, the income level is relatively high. Some of the highest-paying jobs in Rhode Island are as follows:

According to Wikipedia Rhode Island, The State in the Northeastern United States. It is in the New England region. With slightly fewer than 1.1 million residents as of 2020[9], it is the smallest U.S. state by area and the seventh-least populous, but it is second-most densely populated after New Jersey.

Rhode Island’s natural maritime borders have kept it isolated, allowing it to develop its own culture. With a population of over a million, it is a melting pot of ethnicities.

Throughout the year, the temperature typically ranges from 21°F to 83°F, with temperatures rarely falling below 7°F or rising above 90°F.

Rental homes in Rhode Island begin as soon as $300 to $400 a week 2 bedroom homes and can go up to $1,500 per month for larger properties. Several of the rental homes have views of the beach or the ocean and are in quiet areas. The peace and quiet are a big plus, and it is often most desired by vacationers.

The average cost of food in Providence is $38 per day. Based on previous travelers’ spending habits, an average meal in Providence should cost around $15 per person when dining out.

Now, a gallon of regular gasoline in Rhode Island costs around $4.17.

Some say the beach at the base of the 200-foot-tall Mohegan Bluffs is the most beautiful on the island, with a secluded, if rocky, swimming and surfing spot. It is, however, a bit of a climb to get there, with 141 steps leading down to the sand.

Why Should You Hire Moving Companies in Rhode Island?

There are two types of moving companies in Rhode Island. A local mover requires if you are moving within the city or state. You may be moving into or out of the form if your move exceeds 100 miles. In that case, long-distance movers will be required. The primary reason for hiring Moving Companies in Rhode Island is that they provide various beneficial services.