If you are moving to Minnesota, you must hire moving companies in Minnesota. Minnesota is both a northern and a large state in the United States of America. It is located in the north-central part of the country and shares borders with Canada to the north, Michigan and Wisconsin to the east, Iowa to the south, and the two states of South Dakota and North Dakota to the west. Minnesota, also known as the Land of 10,000 Lakes, is one of the largest states in that region of the country. Latitude and longitude coordinates are: 46.392410, -94.636230. 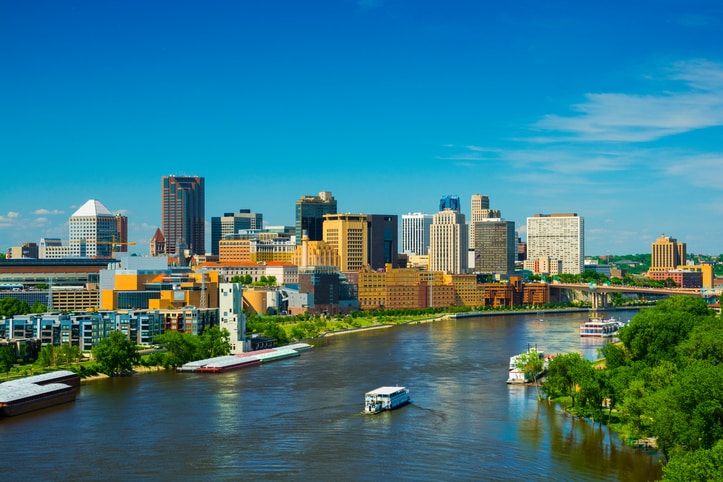 Matt’s Moving is a high-quality but reasonably priced professional moving company in Minneapolis and Saint Paul that handles relocations for families and businesses. No matter where you intend to relocate within the Twin Cities Metro Area, Matt’s Moving will get you and your belongings there without a hitch.

College Muscle Movers, which was founded in 2008, is dedicated to providing the best service possible for each client, based on their specific needs and desires. They collaborate with you to determine the best plan for your move to ensure that everything goes as smoothly as possible.

When it’s time to make the right move, contact A Few Good Movers. This family-owned and operated professional mover has been assisting families and businesses in Minneapolis and the surrounding areas for over a half-century.

AAA Movers is the professional moving company to call if you want a safe and stress-free move within Minneapolis, Minnesota. This mover can handle any type of residential move, whether you’re moving to a new house or an apartment.

Since The Move Crew’s inception in 2015, moving in the Twin Cities has never been easier. The Move Crew, a locally owned and operated professional moving company, has quickly become a favorite mover among locals due to their focus on customer satisfaction and their meticulous attention to detail.

Why do people move to Minnesota?

It is a sports and arts hub, with excellent cultural facilities and venues, as well as a state known for its numerous business centers, educational institutions, and research institutions. Because Minnesota has a large amount of excellent arable land, agriculture and farming play an important role in the state’s economy.

For those looking for work, Minnesota offers a wide range of career options.

As the world’s fastest-growing economy, it has a large number of job openings. Furthermore, in comparison, the income level is relatively high. Some of the highest-paying jobs in Minnesota are as follows:

Minnesota’s economy generated $312 billion in the gross domestic product in 2014. In 2011, Minnesota had 31 publicly traded companies among the top 1,000 revenue-generating companies in the United States. This includes major corporations such as Target and UnitedHealth Group. In 2016, the per capita personal income was $51,990, placing it sixteenth in the country. In 2013, the median household income was $60,900, ranking eleventh in the country.

Minnesotan culture is heavily influenced by its German and Scandinavian populations, as well as recent immigrants from Mexico, Laos, Vietnam, and Somalia, who live in the Midwest of the United States. Minnesota is a fascinating place to live, work, and visit because of its mix of traditional and new cultures.

Throughout the year, the temperature typically ranges from 9°F to 83°F, with temperatures rarely falling below -11°F or rising above 92°F.

Rental homes in Minnesota begin as soon as $250 to $300 a week 2 bedrooms homes and can go up to $1,200 per month for larger properties. Several of the rental homes have views of the beach or the ocean and are in quiet areas. The peace and quiet are a big plus, and it is often most desired by vacationers.

Now, a gallon of regular gasoline in Minnesota costs around $3.927.

Minnesota has long been known for its above-ground beauty, with its acres of forests, glistening lakes, and vibrant wildflowers, but there is also beauty underground.

Why Should You Hire Moving Companies in Minnesota?

There are two types of moving companies in Minnesota. A local mover is required if you are moving within the city or state. You may be moving into or out of the form if your move exceeds 100 miles. In that case, long-distance movers will be required. The primary reason for hiring Moving Companies in Minnesota is that they provide various beneficial services.

BuzzMoving.com Locate the Best moving companies in Minnesota – Save money by getting free moving quotes from pre-screened movers in Minnesota, MN.